Typically, grooms aren’t terribly involved in wedding planning. That isn’t to say that men aren’t very interested in planning. In fact, some of the best of their planning work can be seen in the actual proposal, with some – like these top 10 proposals from last year – truly taking the cake in making unique and special moments of their marriage offers. 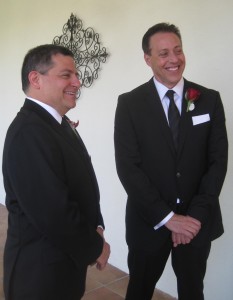 However, the most successful and memorable weddings come about when the bride and groom work together in synergy to create a scene that reflects the romance of their bond. Since men and women tend to think differently, both genders will have to understand the other’s perspective for things to work.

Obviously, not every groom is cut from the same cloth. You’ll have some that are excited for the planning process, and others who would rather try to drain the ocean with a teaspoon. However, almost all grooms have strong opinions on aspects of the wedding ceremony and receptions. To discover these opinions, you’ll have to find his exact perspective on the idea weddings alone. We’ll provide a few generalizations below; however, your groom may be different than most men. Consider these points and bring them up during your wedding planning talks.

By the time most women are engaged, they’ve experienced enough to have a solid idea on what kind of wedding they’d like. Men consider these things too, but probably not as detailed or as often. Men might not think certain details of the wedding are important (and they may be right) because they tend to be a little more realistic when it comes to how the event will turn out.

A common misconception is that grooms don’t care too much about accents of the wedding. It’s not so much that it’s a lack of effort; it’s more that all of the choices are completely overwhelming. If the groom has a very picky bride, the pressure of choosing poorly adds to the stress. This could be why a groom hangs back from making decisions; there’s more to it than he simply doesn’t care. Take a few minutes to discuss the process of selecting vendors and sampling services, and show him the benefits of having input in the wedding planning process.

However, you do have your grooms who don’t realize they care … until they care. He may feel some accents are unimportant or that he’s not needed for mild decision-making, but that’s not true – and he’ll see that. Depending on how stubborn your guy is or isn’t, you may have to remind him that the time to form a negative opinion on the food or cake is before the wedding day!

There are also men like Seth Meyers who do have opinions, but enjoy seeing what the woman can put together. In an article on womangettingmarried.com, Meyers jokes,

“Every now and again, she’ll throw me a courtesy question,” Meyers says. “Do you think the invitations should have seashells or lighthouses? I’ll be like, ‘Seashells?’ And she’ll be like ‘… Not lighthouses?’

“I’m like, ‘Don’t ask me if there’s a right answer!’ She’ll have to make it easier for me. Like, ‘You either get to have lighthouses or rattlesnake.’”

On the other side of the spectrum, you have some men who are just as into the planning as his significant other is. He might be all about a princess-style wedding, but have no idea where to start. You can research together to get an idea of what other men think, as well. Currently, there’s a Pinterest board for exactly this, called “A Man’s Thoughts on Your Pinterest Wedding.”

It doesn’t really come down to gender roles anymore; it’s more or less, how much experience one has with weddings, wedding etiquette and wedding planning. Men tend to dig honesty, especially when it comes to important decision-making and making large investments/purchases. The best thing to do to get your man’s perspective is to tell him that you want his perspective. That way you can work together to have a gorgeous, happy and memorable wedding day.

After understanding a groom’s perspective on wedding planning, discuss the most popular wedding tasks that groom’s care about.

« Make Your Reception Fun: Play a Game!
Sprucing Up Your Save The Date Cards »